We will build a country of our dreams where people are judged by their character irrespective of their political affiliations, religious persuasions, sectional or tribal ground 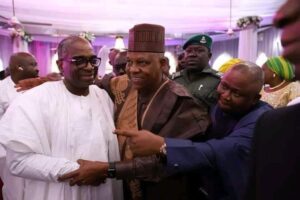 The vice presidential candidate of the All Progressives Congress (APC), Senator Kashim Shettima, has assured Nigerians that when party’s presidential ticket is elected, Asiwaju Bola Ahmed Tinubu administration would be just, fair and inclusive to all Nigerians, irrespective of tribal, religious and political affiliations.

“We need to build a new nation because the hope of the black man is on Nigeria. The onus is on us to secure the future of our children yet unborn.

“I want to assure Nigerians that we are going to be just and fair to all Nigerians. We are going to be all inclusive because no society can strive on injustice. Ours will be all encompassing, all embracing government.

“We will build a country of our dreams where people are judged by their character irrespective of their political affiliations, religious persuasions, sectional or tribal ground,” the former Borno State governor stated.

He commended the South-West part of the country for being a bastion of religious tolerance and generosity, where people are judged by the content of their character, competent and ability, calling on other parts of the country to emulate such for peaceful and development.

In his remarks, Governor Abiodun called on Nigerians to continue to pray to God to see the nation through this difficult and trying times.

“I want to ask that we continue to pray that God Almighty see us through this time. These are really difficult times in the history of the nation called Nigeria. We are seeing things that we never seen before. I don’t have any doubt that we are passing events and in no time, God will see us through. We are the people God has treated wonderfully and He fortified us with lots of endurance and by his grace, we will rise to the top,” he submitted.

In his sermon, the Bishop of Remo Diocese, Church of Nigeria, Anglican Communion, the Most Rev. Olusina Fape, called on Nigerian leaders to live impactful lives that people will remember after their demise.

Speaking on the topic; “Do this in Remembrance of Me” and his text from Luke 22:19, Fape reminded the leaders that no amount of wealth would speak well of them, except the good work they did while in the saddle of leadership.

“There are leaders who were in government yesterday that could have made Nigeria better today but they failed. I want them to know that we will remember them whether they did well or not”, he said.

The clergyman chided the nation’s leaders for embezzling the commonwealth of the people even when it is not useful to them, calling on them to have a change of heart as there is always a retribution at the end of the day.

The memorial event was attended guests including former President Olusegun Obasanjo and a former governor of Ogun State, Aremo Olusegun Osoba, among others.