OPINION: RENDERING ASUU PRESIDENT OUT OF CONTEXT AS BLACKMAIL DEEPENS

In 2013, after over a decade of ASUU's complaints about the "decay and rot" in public-funded education sector, government agreed to set up its own Needs Assessment Committee for the Nigerian University System. Even government was embarrassed about the depth of the rot found 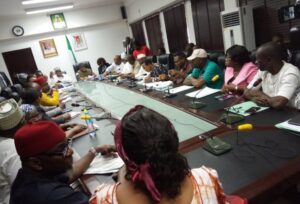 “Two weeks ago, a certain statement alleged to have been made by ASUU’s late illustrious President, Comrade Professor Festus Iyayi debuted on the social media to the effect that ASUU is (will be) fighting only for the welfare of lecturers! The post (clearly a stupendous blackmail) was quickly exposed for what it was: FAKE NEWS!

If fake news couldn’t be sustained, we know that ASUU’s detractors will use other means!
Thus when ASUU President referred to “quacks”, he was not talking about ASUU members who have suffered physically and psychologically to defend the Nigerian university system, those who insist that a responsible ruling class must provide at least the minimum conditions for teaching and learning in public educational institutions. It is in contradistinction to such committed lecturers that Professor Emanuel Osodeke referred to academics and university administrators who want to blackmail ASUU to surrender as “… those quacks”!

In the last two decades or so, various segments of our society have complained of the deterioration, the decay, the “rot” in our university system. Admittedly, some of these complaints are also made by government and ruling class forces that are also looking for excuses to completely abandon public funded education sector. But ASUU is not only saying that the decay is palpable but that it has resulted from government irresponsibility and, calculated and inspired, neglect.

Accreditation exercises by NUC, government’s own regulatory agency, regularly withdraws approval from many academic programs because of inadequate manpower and facilities. It’s been ASUU’s interventions regarding funding that have prevented total collapse in these regards. Just as it had been the patriotic interventions of the doctors, especially NARD, and the other health sector workers that have kept public hospitals and other public health facilities tolerably functional; any doctor or health worker who abandons his or her union or association in that struggle is promoting “quackery”!
And ASUU President was talking about PARTICULAR state universities where lecturers are not on strike, or where ASUU had been intimidated to abandon the nationwide strike, and/or where ASUU had been BANNED?

It is also the truth that while ASUU continues to call public attention to ruling class irresponsibility in respect of the university system, reports abound that certain university administrations and proprietors in a significant segment of the ENTIRE university system (federal, state, and private) are engaging in frauds, cover up and quackery to deceive NUC accreditation teams borrowing books and journals from school and private libraries, hiring or borrowing equipment to display for accreditation purposes, deploying fake lecturers and technical staff, and so on!

In 2013, after over a decade of ASUU’s complaints about the “decay and rot” in public-funded education sector, government agreed to set up its own Needs Assessment Committee for the Nigerian University System. Even government was embarrassed about the depth of the rot found; the Needs Assessment Report had since been in public domain! The committee estimated in 2013(!) that N1.3 trillion would be required to begin “revitalization” which is envisaged to proceed from 2013 to 2018 at about N250 billion per year. At today’s worth of the N1.3 trillion of 2013 will be worth about N6 trillion!

Notwithstanding the logic that the decay in the universities have deepened, ASUU’s current strike has elicited a paltry N120, billion that may or may not materialize in 2023 federal budget as is now being PROMISED by government! And they think that, with the almost daily media report of pillage of public treasury, the claims that “government is broke” will “wash”!

Any group or individual who aids this decay and rot, or who asks others to surrender to the regime of rot, is actually worse than a quack! All genuine Nigerian patriots know that the Nigerian crisis is not just about the education sector. It is every where–economy, cost of living, looting of public resources, unemployment, unpaid wages across the country and across sectors in a regime of virtual criminalization of strikes, insecurity and ruling class manipulation of language and faith differences among our people. ASUU’s dignified struggle and sacrifice should therefore galvanize the entire working people of Nigeria to defend themselves and their country!

This is why we wish to continue to encourage the Nigerian labour movement, informal, organized, the youth, etc., to continue to advance ASUU’s struggle as a critical segment of the Struggle of the Nigerian people.
ASUU is in a struggle that started definitively in 1978 when the World Bank and IMF took over our country; and we are persuaded that the essence of any necessary struggle is not necessarily about winning!

And we know that we shall overcome.”