They claimed that the government would need to borrow N1.6 trillion to implement the draft agreement; a claim that is not only malicious but contrived to blackmail the Union. 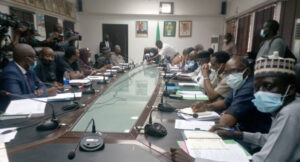 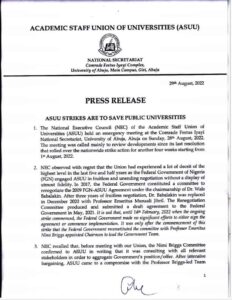 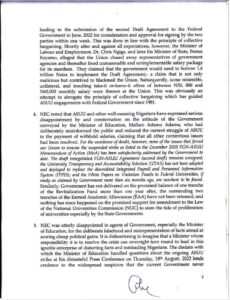 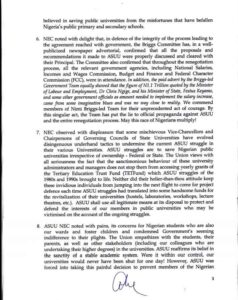 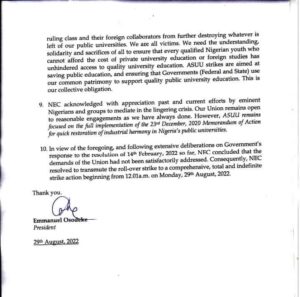 “Following extensive deliberations on government’s response to the resolution of February 14, 2022, so far, NEC concluded that the demands of the union had not been satisfactorily addressed.

Consequently, NEC resolved to transmute the roll-over strike to a comprehensive, total and indefinite strike action beginning from 12.01am Monday, August 29, 2022.

NEC acknowledges with appreciation past and current efforts by eminent Nigerians and groups to mediate in the lingering crisis. Our union remains open to reasonable engagements as we have always done.

However, ASUU remains focused on the full implementation of the December 23, 2020 Memorandum of Action for quick restoration of industrial harmony in Nigeria’s public universities.
NEC noted with pains, its concerns for Nigerians students who are also our wards and foster children and condemned government’s seeming indifference to their plights. Were it within our control, our universities would never have been shut for one day.”

Our union remains open to reasonable engagements as we have always done. However, ASUU remains focused on the full implementation of the 23rd December 2020 Memorandum of Action for quick restoration of industrial harmony in Nigeria’s public universities.

NEC observed with regret that the union had experienced a lot of deceit of the highest level in the last five and half years as the Federal Government of Nigeria (FGN) engaged ASUU in fruitless and unending negotiation without a display of utmost fidelity.

“In 2017, the Federal Government constituted a committee to renegotiate the 2009 FGN-ASUU Agreement under the chairmanship of Dr. Wale Babalakin.

“After three years of fruitless negotiation, Dr. Babalakin was replaced in December 2020 with Professor Emeritus Munzali Jibril. The Renegotiation Committee produced and submitted a draft agreement to the Federal Government in May, 2021.

“It is sad that, until 14th February, 2022 when the ongoing strike commenced, the Federal Government made no significant efforts to either sign the agreement or commence implementation.

“It was only after the commencement of this strike that the Federal Government reconstituted the committee with Professor Emeritus Nimi Briggs appointed Chairman to lead the Government Team.

“NEC recalled that, before meeting with our Union, the Nimi Briggs Committee confirmed to ASUU in writing that it was consulting with all relevant stakeholders in order to aggregate Government’s position/offer.

“After intensive bargaining, ASUU came to a compromise with the Professor Briggs-led Team leading to the submission of the second Draft Agreement to the Federal Government in June 2022 for consideration and approval for signing by the two parties within one week. This was done in line with the principle of collective bargaining.

“Shortly after and against all expectations, however, the Minister of Labour and Employment, Dr. Chris Ngige, and later his Minister of State, Festus Kayamo, alleged that the union chased away representatives of government agencies and thereafter fixed unreasonable and unimplementable salary package for its members.

“They claimed that the government would need to borrow N1.6 trillion to implement the draft agreement; a claim that is not only malicious but contrived to blackmail the Union.

“Subsequently, some miserable, unilateral, and insulting take-it or-leave-it offers of between N30, 000 and N60,000 monthly salary were thrown at the Union. This was obviously an attempt to abrogate the principle of collective bargaining which has guided ASUU engagements with the Federal Government since 1981.”

OPINION: RENDERING ASUU PRESIDENT OUT OF CONTEXT AS BLACKMAIL DEEPENS