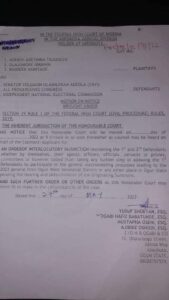 Abeokuta division of the Federal High Court has restrained a Senator representing Lagos West Senatorial District, Sen. Olamilekan Adeola from parading himself as the winner of the APC primary election of Ogun West senatorial district, conducted on Saturday, 28th May, 2022 at the Oronna Hall, Ilaro, Yewa South of Ogun State.

The plaintiffs Adebiyi Adeyinka Tajudeen, Olajumoke Ibrahim and Muideen Akintade challenged the Lagos West Senator for denigrating the
political reputation of the people of Ogun West.

They further submitted that contesting without being a member of the party in Ogun West nor a registered voter in Ogun West Senatorial District is contrary to the Constitution of Nigeria repugnant to natural justice, equity and good conscience.

The legal document says the move by Senator Olamilekan Adeola is undemocratic, flirtatious, disenfranchising, illegal, abnormal, denigrating to the political reputation of the people of Ogun West and Nigeria at large.

They noted that declaring him a winner in a primary election in Ogun State is in brazen violation and flagrant breach of the right of the people of Ogun West to vote and be voted for.

They recalled that genuine elders, leaders and stakeholders of Ogun West APC are not in support of the illegal move, and neither have any of the legitimate aspirants been endorsed for the Senate seat of our senatorial district, talk more of Senator Olamilekan Adeola – who by clear provisions of the constitution and the electoral act is not qualified to contest elections in Ogun State. Therefore, any group of persons that have endorsed a foreigner, are speaking for themselves and not for Ogun West.

“Significantly, we call on the National Working Committees (NWC) of our party, under the leadership of His Excellency, Senator Abdullahi Adamu to intervene and halt the illegality being perpetrated in Ogun State.

“Finally, we restate that this action is to protect the integrity of our senatorial district and preserve the legacies of our forebears who by now, will be turning in their graves at the attempted desecration of Yewa-Awori land.

They also called on the National Working Committee of the All Progressive Congress (APC) to send caveats to Senator Solomon Olamilekan Adeola to desist from causing political crisis in Ogun West ( in the interest of APC’s victory in Ogun West Senatorial District)— as we have capable true indigenes who could contest and represent Ogun West at the Red Chambers come 2023.

We also call on the good people of Ogun West to remain calm and focus as we will ensure that we are not represented at the red chamber by any impostor or stranger at the 10th National Assembly. We shall soon have our unpolluted political atmosphere back in one piece.

STRUGGLE CONTINUES, VICTORY IN SIGHT, SAYS OBI AS HE GETS LP TICKET

STRUGGLE CONTINUES, VICTORY IN SIGHT, SAYS OBI AS HE GETS LP TICKET