The Chairman of the Lagos State Taskforce, CSP Shola Jejeloye has issued a final warning to traders and commercial motorists along Oshodi road to desist from displaying their wares on the walkways and parking indiscriminately on the road which causes congestion and impedes free flow of traffic along that axis.

He made this statement today at the Headquarters of the Agency at Bolade Oshodi where he issued a strong warning to the market leaders who had been warned earlier this year to inform their members who are in the habit of displaying their goods indiscriminately on the roads and walkways even after adequate provisions of Market place, Shopping Plaza and Nigerian Army Shopping Arena had been made by the Government, therefore they have no reason to violate traffic and environmental laws.

“We carried out an enforcement exercise on the 9th of March early this year where some goods were seized from the traders, vehicles impounded from some commercial bus drivers, but we had compassion on the traders and some drivers, who had gotten some of the goods through soft loans with the promise that they would not return to the roadside again. Unfortunately, we can see that they are fully back on the road, but this time, anyone who is caught displaying goods by the road side will be arrested and prosecuted by the Agency” Jejeloye stated.

Consequently the Chairman stated that the Agency will not be taken for a ride by traders who see us as next door neighbours as the full wrath of the law will be metted out on anyone whose selfish actions causes pains and discomfort to Lagosians in general. Displaying of goods by the road side is selfish and goes against the plans and design of a 21st century mega city status in line with the T.H.E.M.E.S agenda of the State Government.

Jejeloye appealed to the market leaders and parks/garages managers to relay the message in detail to all traders and drivers who are in the habit of engaging in such practices, stating that ignorance will not be an excuse this time around.

He urged them to make use of the market places, parks and garages and building plaza provided by the State Government which is more safe and convenient to carry out their businesses. He called on sister Agencies like the Lagos State Environmental Sanitation Corps who have also been carrying raids of road side traders to partner with the Lagos State Taskforce in ensuring that orderliness and sanity is achieved and maintained on the roads. Once achieved, Lagosians would have shorter travel time as a result of free human and vehicular movement along these corridors.

Commercial vehicles operators who are known to be unruly and have total disregard for road traffic rules will henceforth be arrested and have their vehicles impounded if they do not turn over a new leaf. Designated bus stops and motor parks have been provided in Oshodi, so there is no reason to inconvenience Lagosians by parking in the middle of the road to drop off and pick up passengers. “It will no longer be business as usual” He concluded. 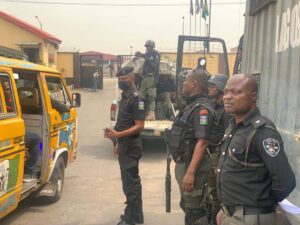