Saraki was governor, he did nothing here. Ahmed who succeeded him also messed up totally and abandoned this area. We stoned Saraki here because we were not happy with him, and we are ready to stone him again 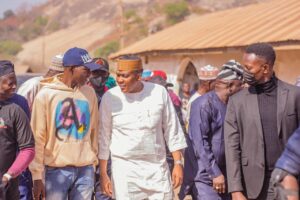 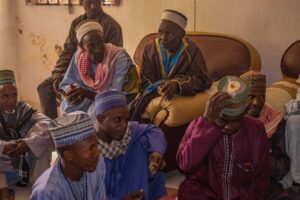 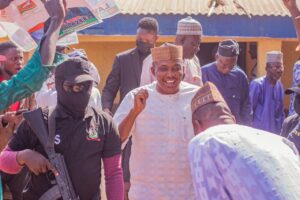 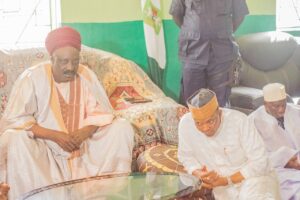 The Baruten Youths Organisation and the Fulani Progressive Youth Alliance have given their backing and massive endorsement to the gubernatorial candidate of the Social Democratic Party (SDP) in Kwara State, Alhaji Hakeem Oladimeji Lawal as his state-wide consultative meeting with stakeholders and groups continued in Okuta and Kosubosu in Baruten Local Government Area of the State last Wednesday.

Leader of the Baruten Youths Organisation, Mallam Halidu Muritala Mohammed explained that the criminal neglect of the area has become a major source of discontent of the people and they are earnestly hoping on the SDP and its candidate, Alhaji Lawal as the credible alternative that will wipe away the tears of the people over the abandonment of the zone by successive government.

He recalled that the anger of the people got to its peak when they stoned the former Senate President and former governor of the State, Bukola Saraki when he came to campaign in Kosubosu town in 2019.

“Saraki was governor, he did nothing here. Ahmed who succeeded him also messed up totally and abandoned this area. We stoned Saraki here because we were not happy with him, and we are ready to stone him again if he ventures to come here to campaign for his candidate.

“We are following Hakeem Lawal and the SDP. Whatever we say here will happen. You will win because we believe you are going to wipe away our tears,” he said.

The Traditional ruler of the town and the Senawegi of Kosubosu, Alhaji Ibrahim Saka also prayed for the success of the team in the election. The team also met with the leaders of the Christian Association of Nigeria, CAN in the town, where the deputy governorship candidate, Reverend Joshua Olakunle assured them that the Hakeem Lawal’s administration will “rule with the fear of God, which is the beginning of wisdom.”

Earlier, the entourage was in Okuta where the Emir of the town, and the permanent chairman of the Baruten Emirate Council, Alhaji (Hon) Dr Idris Abubakar observed a two-minute silence in honour of the former governor Mohammed Lawal of Kwara State and enjoined Hakeem Lawal to surpass the records of his father in terms of good governance and service to the people. “Former governor Lawal is somebody I cannot forget. You will win and I advise you to surpass the record of your father,” he said.

The candidate thereafter met with the youths and leaders of the Fulani community in the area, as they also pledged their support for Hakeem Lawal and the SDP. According to them, Baruten Fulani elders and youths will vote for Lawal, while also pleading that the government should address the issue of marginalization, unemployment, infrastructural deficiency in the area when he comes to power.

Sadam Mohammed Hussein, leader of the Fulani Progressive Youth Alliance in Baruten assured that the group is irrevocably committed to the Lawal’s project because the candidate is of their generation and a credible alternative to the present rot plaguing the State.

The team was also in Yashikira where the Emir of the town, Hon. Dr Lafia Aliyu Kora Sabi prayed and gave his royal blessings to Hakeem Lawal and his team.

Responding at all the meeting points, Alhaji Lawal restated his four point agenda and roadmap of transforming the state in the areas of Education, Agriculture, Infrastructure and Human Capital Development.