Our discussion today is a covenant between us. The two parties must do their part. When you vote for us, it becomes a debt for us to do our part too 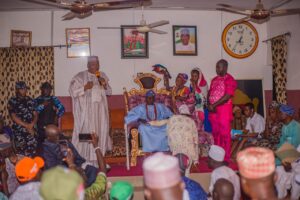 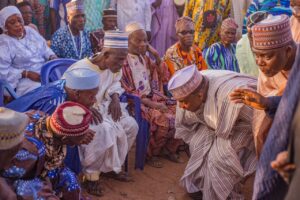 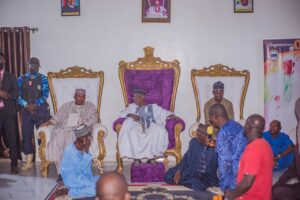 The gubernatorial candidate of the Social Democratic Party (SDP) in Kwara State, Alhaji Hakeem Oladimeji Lawal has promised that the major plank of his government will be to pursue a unity of purpose among all Kwarans that will pave way for the progress and accelerated development of the State.

The SDP gubernatorial candidate who was speaking on Saturday during his on-going state-wide consultative meeting with stakeholders and groups In Moro Local Government Area, when the train stopped at Sheji, the seat of all Mogajis/Baale in Lanwa area, also prayed that God should actually use him and his party to unite the State more than ever before.

According to him, the people of Kwara must be united in purpose and vision for the State to develop and progress, adding that a major obstacle to progress is disunity, because a people united can never be defeated.

Responding, the Baale recalled the good deeds of the late former Governor Mohammed Alabi Lawal, the father of the gubernatorial candidate, who they claimed, made them to see the good side of politics. ’Since you came here to seek our support and blessing, you have won. You are our saviour and God will make you the saviour,” their spokesman said.

Earlier, the team had been in Shao, where the Ohoro of Shao, Oba (Dr.) Bamidele Alabi Adegbite, his Queen and Council of Chiefs gave their blessings and prayed for the success of Lawal’s gubernatorial ambition.

The Monarch particularly praised the Party’s Campaign Council Secretary, Dr. Bolaji Afolabi for leading the team to the town, describing him as a worthy prince and a capable political leader in the area.

The party later met with the leaders of the Christian Association of Nigeria, CAN who prayed for the gubernatorial candidate and urged him to follow the path of integrity toed by his late father, who governed the State between 1999 and 2003. “Your father was a man of integrity, he stood by his words. Please follow his footsteps,” Reverend Andrew Adebayo, the group spokesman said.

The consultative train also took the party to Jebba where it met with the Monarch of the town, Oba Alabi Abdukadir Adebara who also gave his blessings before the party met with the League of Imams, the leaders of CAN and groups comprising artisans, market women, farmers and transporters.

Responding at all the meeting points, Alhaji Lawal restated his four point agenda and roadmap of transforming the state in the areas of Education, Agriculture, Infrastructure and Human Capital Development.