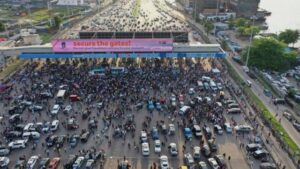 National Women Leader Aspirant of the All Progressives Congress ahead the Saturday National Convention, Hon Betta Edu has reiterated and affirmed her loyalty to President Muhammadu Buhari, the party and all members of the APC, saying that her loyalty is complete and total.

In an emotional statement released on Tuesday in Abuja titled: Let’s Move Forward and Unite Round Our Shared Objectives as Progressives”, Edu expressed confidence in her ability to rally women’s vote and Mobilise their support across the country.

The statement reads in part: ‘My loyalty to the All Progressives Congress and the President Muhammadu Buhari-led administration is complete and total.
“I am one of you, and I seek to lead our women because I believe in my ability to rally women’s votes and mobilize their support across the country based on well-developed policies and strategies to facilitate their membership of the party, and to spur and guide our leadership across all levels on impactful ways to prioritize women-focused issues that will hasten the growth of the country and significantly improve our chances at the polls.

“Since my entry into the party, I have focused on and made significant progress in the mission to deepen the acceptance of the APC in Cross River state and across the South-South region. This is even more so amongst women with whom I have built decades-long relationships based on my advocacy and championing of their inclusion and empowerment.

“I am convinced that this goal of expanding the reach and influence of the party in a region still considered the stronghold of the opposition is one that we all share, considering its grave importance to our chance of retaining political power, especially at the center.

“I appeal to you all for your understanding in the request to unite around these shared objectives and continue with the all-important integration process and consensus-building that will help grow the party and win more converts.”

However against the backdrop of attack on her person as a result of her posts and tweets during the Endsars protest, the aspirant begged for understanding and insisted that she had never endorsed violence in any of its crudest form as its been spread in the social media.

On her role during the protest, she said” I am aware of the fact that some of my previous actions as a member of the opposition party, notably my stance during the nationwide ENDSARS protests that gripped the nation in the year 2020, have generated confusion and caused some to question both my loyalty to the APC and my fitness to serve in its leadership structure.

“While I admire the courage and devotion of our party members whose scrutiny of my profile unearthed past comments and positions, I wish to set the records straight and offer a contextual understanding of these isolated comments at issue today by stating clearly and fully the motivations that guided my actions during what was a pivotal moment in the country’s recent history.

“When the ENDSARS protest first broke out in the year 2020 as a civil agitation against the very real problem of police brutality, like most Nigerians, I was sympathetic to the cause, more so because I have equally been subjected to a most traumatic experience by policemen who violated the ethics of their profession and my basic rights as a Nigerian.

“My sense at the time was also that the President Muhammadu Buhari-led administration indeed acknowledged the existence of the problem and reiterated its commitment to tackling it with promised reforms and other institutional changes, hence the acceptance of the ‘five for five’ demands outlined by the recognized leadership of the protest movement.

“However, contrary to insinuations making the rounds, I did not at any point endorse the use of violence as a way to express these concerns or call the attention of the government. In actual fact, I have evidence of media appearances and interviews that I granted to condemn the sad and most unfortunate degeneration of the movement to widespread violence, arson, and damaging vandalism.

‘I wish to thank everyone, especially members of our great party, the All Progressives Congress (APC), who have supported my bid to advance the growth and success of the party by serving on its National Working Committee as the National Women Leader.

“Your support, goodwill, and comradeship since my ambition became public, and all through my membership of the party thus far, have strengthened my firm belief and optimism that our party, the APC, represents Nigeria’s best hope for achieving equitable growth and sustainable development.

When I made the decision last year to follow my political leader and the Governor of my home state of Cross River, Prof. Ben Ayade, into the party, it was based on this conviction and a genuine desire to do more for our women and other Nigerians on a platform that is both conducive for growth and resolutely focused on the same. So far, I have not been disappointed, and I am grateful to all of you for that.

“In my home state of Cross River, I witnessed the horrifying effects of the turn to violence, including the looting of healthcare facilities and other important institutions leading to the loss of sensitive equipment and resources such as sample tests and other important state materials.

“I do acknowledge that a few of my spur-of-the-moment tweets and impulsive reactions to reports at the climax of the event may have been indelicate and distorted my true position on things. I am human, a mom, and thus given to emotions. However, I want to reassure and appeal to my progressive comrades who are expressing concern not to reduce my intentions and nuanced political views in the past to a couple of badly-worded tweets. ”

The vibrant and erudite, young politician however urged all party members to look forward to the future and commit to rebuilding and strengthen the APC to meet the hopes and expectations of Nigerians who daily look to us for solutions to existing challenges and the consolidation of recorded progress.

PRESIDENCY SAYS PDP HAS GIVEN ITSELF AWAY ON ITS DESTABILISATION PLOT

GLORY HAS DEPARTED THE VARSITIES – AKEREDOLU REACTS TO OAU INVASION

GLORY HAS DEPARTED THE VARSITIES - AKEREDOLU REACTS TO OAU INVASION