AS LAWAL’S SON, I BELIEVE YOU WILL DO WELL AS GOVERNOR, EMIR OF ILESHA-BARUBA TELLS SDP GUBER CANDIDATE

Hakeem Lawal, by virtue of his background, is not a stranger to me. Your father was a very good man, I feel sad he was not able to complete his good work, and I pray you will succeed in continuing his good works." 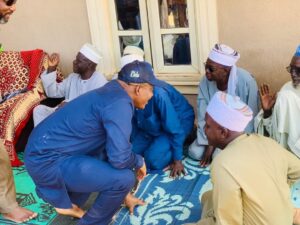 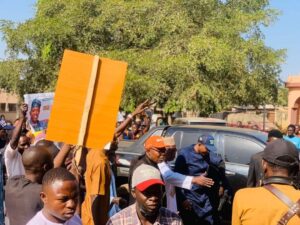 Receiving the team in his palace, the Emir of Ilesha Baruba, Professor Halidu Abubakar welcomed the gubernatorial candidate and his team and declared that “as the son of former governor Mohammed Alabi Lawal, I am confident that Hakeem Lawal will succeed and do well as governor.

According to him, “Hakeem Lawal, by virtue of his background, is not a stranger to me. Your father was a very good man, I feel sad he was not able to complete his good work, and I pray you will succeed in continuing his good works.”

The Emir thereafter prayed for him and wished him well in his gubernatorial pursuit.

Responding, Alhaji Lawal maintained that his desire is primarily to restore the lost glory of Kwara, adding that Baruten Local government is big and full of potentials, but has sadly been neglected. He prayed that God will use him to realise the dream of the Emir and other well meaning Kwarans for the State.

The train later left to visit the Chief Imam of the town who also prayed for the candidate, adding that his father, former governor Lawal remained the only governor who, after visiting the Emir of the town, also visited him, and no other governor visited him, until the son, Hakeem came to him today.

The gubernatorial candidate later met with artisans, youth and women groups before departing to Gwanara, where the Emir of the town, Dr. Idris Abdullahi Kotokotogi II also gave his royal blessings.

The team later continued the trip to Okuta, with several stop overs along the roads where the candidate addressed the mammoth crowd who had gathered to welcome him.

In his remarks at all the meeting points, Alhaji Lawal restated his four point agenda and roadmap of transforming the state in the areas of Education, Agriculture, Infrastructure and Human Capital Development.

UBA REWARDS CUSTOMERS WITH 22.5M IN SUPER SAVE PROMO