Williams was raised in Lagos of mixed parentage and has lived all his life in the city.

He holds a Masters’ degree in Mass Communication from the prestigious University of Lagos, Nigeria and is the Managing Director of Franchise & Enterprise Concerns Limited, an Integrated Marketing Communication (IMC) outfit, and coordinator of The Black Man’s Rebirth projects.

He is a journalist and Publisher of International Enterprise magazine and he also operates two International franchises in Nigeria.

Adewale started his first company in 1993 and has been responsible for several projects on television. He has also maintained a climb in project development and consultancy the hallmark of his profession.

In 1997, he wrote, and produced a soap opera titled TIDES that ran on AIT in Nigeria. He also developed the Oyo Festival for the government of Oyo State in 2011.

Williams is also responsible for the Ileya Omo Oodua festival projects which is an homecoming festival for blacks in Diaspora to Ile-Ife for the Ooni of Ife.

The festival hosts the naming ceremony (Isomoloruko) of black people who return to Yorubaland. He packaged the visit of The Yoruba King, The Arole Oduduwa, Ooni Adeyeye Enitan Ogunwusi Ojaja II the Ooni of Ife to Brazil in 2018. It was on this trip that the city of Bahia in Brazil was declared the Spiritual Capital of the Yorubas in the Americas.

That same year, the Brazilian government recognized Yoruba language as a national language.

The new President also has a passion for helping kids and the youth to find their passion in starting a business. He developed the Young Leaders Enterprise Network Projects and designed three different entrepreneurship kits titled Start your Business packs for Kids ( Kidprenuer) and teens (Teenpreneur).

He has just started the first online school in Nigeria called The Enterprise College. He has also just developed an international board game called BILLIONS

He is an author with two books ‘How to raise a Young Billionaire’ and ‘The Blackman’s Rebirth/Oyinbo book. 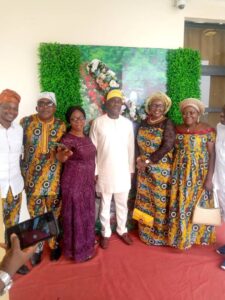 He is happily married with kids.