The gubernatorial candidate of the Social Democratic Party (SDP) in Kwara State, Alhaji Hakeem Oladimeji Lawal has debunked speculations that he is in the 2023 race to merely trade away his chance in a deal with other political parties.

Alhaji Lawal who was speaking in Ajase-Ipo, venue of the flag-off of the Kwara South Senatorial campaign on Monday explained that the speculations about negotiation to trade the SDP mandate with other parties is a figment of imagination from sinking party which is desperate to remain afloat. 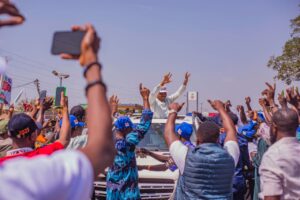 . ”We are not negotiating and will not negotiate to trade away our mandate and the support of the people. The people and God remain our pillar of support and we are confident of victory in the coming election,” he said.

The gubernatorial candidate therefore urged the people to get ready and use their votes sweep away bad government and governance in the State, adding the SDP is sure of victory in the three Senatorial districts of the State.

Amidst thunderous ovation from the surging crowd of supporters and party faithful, Alhaji Lawal restated his reform agenda in the areas of Education, Agriculture and Local Government administrations for the socio-economic transformation of the State.

He recalled that “from inception, Kwara State was created based on two principles of comparative advantage: Human Resources and Agriculture. This was what led to the boom where the State provided the major Human Resources to the civil service in entire Northern Nigeria.”

According him, Kwara used to be a leading light in the Northern region, but sadly, the reverse is the case today. The SDP is ready to restore those glorious days and put Kwara back on the path of progress.

On Agriculture, Lawal maintained that the State boasts of many Agriculture Belts, adding that “for instance, we had Rice and Sugar Belts in Patigi, Cotton Belt in Baruten and Cocoa Belt in Irepodun Ekiti, Oke Ero in Kwara South.

He promised that the sector will be modernized to maximize the full potentials of the sector for greater returns to the farmers in order to make farming attractive to both the old and the young. “We will also establish marketing companies to save our farmers for exploitation and the vagaries of market forces,” he added.

He also assured that his Local Government Council reforms will grant some level of financial autonomy to the Local Government administrations and foster a mutually beneficial relationship between the Councils and the State government.

“The emasculation of the Local Government administration has stifled development at the grassroots. Apart from early election, we will release their money to them and equally give them some level of independence to utilize their resource for development of the people.

“The APC government in the state refused to conduct Local Government election because they are afraid of the people. But I am prepared to conduct Council election as early as possible and remove the shackles of under-development from the grass root.

“We will also try bridge the disparity between the salary of workers on the same level in the State and the Local Government Councils,” he said.