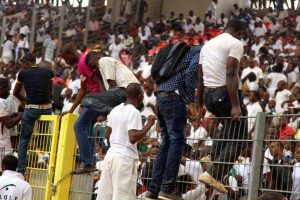 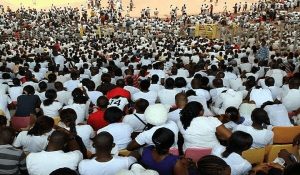 Justice Nnamdi Dimgba of a Federal High Court sitting in Abuja today, April 7 convicted a former Permanent Secretary at the Ministry of Interior, Anastasia Daniel-Nwobia on charges of fraud arising from the controversial 2014 Nigeria Immigration Service recruitment but deferred her sentencing till April 17, 2022.

The former Permanent Secretary was prosecuted by the Economic and Financial Crimes Commission, EFCC, alongside Senator Abba Morro, former Minister of Interior; Femi O Alayebami, a Deputy Director in the Ministry; one Mahmood Ahmadu (at large), and Drexel Tech Nigeria Ltd.

The amount represents N1, 000 obtained from each applicant through e-payment for the online recruitment exercise on March 15, 2014 – an ill-fated exercise that led to the death of more than 15 applicants.

But in his judgment today, Justice Dimgba convicted Daniel –Nwobia on count 4 but discharged Morro and Alayebami on all remaining four counts.
The court in convicting Daniel- Nwobia, held that as the accounting officer of the ministry, it was her responsibility to ensure compliance with the Public Procurement Act and, having found that there was no approval from the Bureau of Public Procurement (BPP) before inviting the four companies, found her guilty.

On the other hand, the court in exonerating Morro, held that the EFCC failed to prove how the he abused his position as minister as he was neither a member of the tenders board nor a member of the committee that recommended the setting up of e-recruitment portal for the exercise

Meanwhile, the EFCC has vowed to appeal the ruling on Senator Morro. The Agency averred that the trial court erred in discharging the former minister and his co-defendant.

All the defendants were initially arraigned before Justice Anwuli Chikere of the Federal High Court, Abuja.

THE PRESIDENCY IS NOT 'PONMO AND AMALA': MELAYE BLASTS FAYOSE OVER 2023