The crisis in the All Progressives Congress (APC) has taken a new twist after the Independent National Electoral Commission (INEC) rejected the notice for an emergency meeting of the party’s National Executive Committee (NEC).

INEC secretary, Rose Oriaran-Anthony, confirmed the commission’s decision in a letter dated March 9, 2022, and addressed to the party’s ‘national chairman’.

“The commission draws your attention to the fact that the notice for the meeting was not signed by the National Chairman and National Secretary of the CECPC contrary to the provision of the Article 1.1.3 of the Commission’s Regulations and Guidelines for Political Party Operations (2018),” said Oriaran-Anthony.

Governor Abubakar Bello of Niger State, who recently took over the leadership of the party, reportedly signed the letter.

He had requested the commission’s presence at an emergency meeting of the APC NEC ahead of the party’s forthcoming national convention. 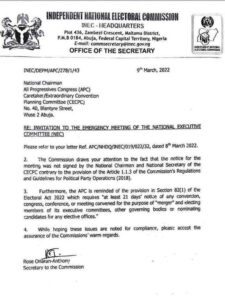 But INEC, in its response, rejected the invitation, stressing that the national chairman and secretary of the APC Caretaker Extraordinary Convention Planning Committee (CECPC) ought to have signed the letter.

It added that the Electoral Act required that the electoral umpired must be given at least 21 days’ notice of any convention, congress, conference, or meeting for such purpose.

“Furthermore, the APC is reminded of the provision in Section 82(1) of the Electoral Act 2022 which requires ‘at least 21 days’ notice of any convention, congress, conference, or meeting convened for the purpose of ‘merger’ and electing members of its executive committees, other governing bodies or nominating candidates for any elective offices,” said Oriaran-Anthony.

“While hoping these issues are noted for compliance, please accept the assurance of the commissions’ warm regards.”

About three weeks to the party’s national convention scheduled to hold on March 26, reports emerged that Governor Mai Mala Buni of Yobe State had been sacked as chairman of the CECPC.

Amid the reports, Governor Bello presided over a meeting of the CECPC at the party’s national secretariat in Abuja on Monday.

At the end of the meeting, he told reporters that he has taken over as the party’s acting chairman, saying he has the support of President Muhammadu Buhari and other leaders of the APC.