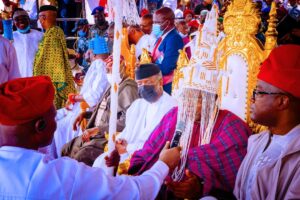 The uniqueness of the city of Ibadan transcends the rich culture of the Yoruba people and the politics of the South-West region as it is renowned for its many firsts; in education, sports, broadcasting, and even the birthing of the Nigerian nation, according to Vice President Yemi Osinbajo, SAN.

Prof. Osinbajo stated this in his remarks today at the coronation of the new Olubadan of Ibadan, His Imperial Majesty, Oba Dr. Senator Mohood Olalekan Ishola Balogun, Ali-Iwo (Alli Okunmade II), in Ibadan.

Highlighting the uniqueness of the city and its impact on the lives and livelihood of the people, the Vice President said “Ibadan was and has always been a city on a hill, a place of refuge and a realm in which individuals could rise by the grace of their talents, on merit and their diligence.

“It embodies the values of openness, diversity and high achievement. It is therefore not surprising that Ibadan is a city of many firsts.”

Continuing, Prof. Osinbajo noted that “it was in this city that the call for Nigeria’s independence from British rule first resounded. The people of Ibadan bore witness to the exploits of iconic nationalists and leaders such as Dr Nnamdi Azikiwe, our country’s first President and the sage Chief Obafemi Awolowo, who was Premier of the Western Region for a time that is widely regarded as the region’s golden age.

“Ibadan became the hub of politics in the then nascent nation and the capital of the Western Region. It was and is still acknowledged as the political headquarters of the entire South-West Nigeria.”

In the field of broadcasting, sports, education and infrastructure, the Vice President said “it is home to the first indigenous TV station in Africa. It is also the home of the Shooting Stars Sports Football Club (3SC) – the first Nigerian club to win an international trophy – the African Winners Cup in 1976.

“This is the home of the first university in Nigeria, –and for many years the iconic Cocoa House was the tallest building in Nigeria standing as a towering edifice dominating the city’s skyline – a powerful visual reminder that Ibadan inspires us to ceaselessly strive for greater heights in every endeavour.”

In the management of its traditional institution, Prof. Osinbajo noted that “Ibadan is unerringly unique. As we all know, whoever would become an Olubadan must climb 23 chieftaincy steps from either of two lines: the Civilian and the Military. But it is its predictability, and orderliness that ranks it among the most peaceful and unique ascension protocols anywhere.”

The Vice President who spoke after Oyo State Governor, Engr. Seyi Makinde presented the staff of office to the new Olubadan, urged the Oba to remain diligent in taking on the duties and responsibilities bestowed on him, noting that “it is a heavy obligation of history that the privilege of your ascension to the throne of your fathers now places upon your shoulders.”

While congratulating the new monarch on his coronation, Prof. Osinbajo assured the people of Ibadan that the Olubadan possesses all that will be required to discharge the duties of the throne, stating that “your shoulders are broad and sturdy as you come into this office better prepared than probably any monarch anywhere.”

His words: “Everything in your remarkable life and times, your abiding dedication and love for the people of Ibadan, your breadth of intellect, the openness of mind and largeness of heart has inexorably led to this auspicious day of your crowning as the Olubadan of Ibadan. And will serve you well on the throne.”

Present at the event were notable traditional and political leaders from the South-West region and beyond, including former Vice President of Nigeria, Alhaji Atiku Abubakar; Governors of Ekiti, Kayode Fayemi; Ogun, Dapo Abiodun; Kano, Abdullahi Ganduje; some deputy governors and members of the Federal Executive Council.

BETWEEN PROFESSIONAL POLITICIANS AND PROFESSIONALS IN POLITICS: TOKUNBO MODUPE’S STORY IN ONDO POLITICS