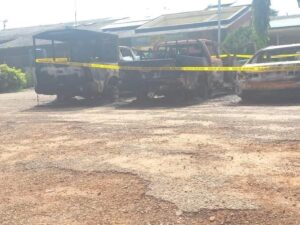 Then they attacked another section of the wall with even higher grade explosive which brought the wall down. The forces on ground did everything they could to repel them but the numbers they came with was overwhelming which they were not able to fight against. But they kept on fighting gallantly, unfortunately the breach happened.

The incident took about 30 minutes, then reinforcements arrived. The inmates here are about 994. And when they broke out, because this people came specifically, we understand they are Boko Haram, they came specifically for their co-conspirators, in order to get them, some of them are now in the general population. So they broke out and other people in that general population also escaped.

But many of them have returned, they have reported themselves to the police, some we have successfully retrieved from the bushes were they were hiding. And right now we have retrieved about 300, out of about 600 that escaped their cells.”

LIGHT OUT FOR DISCOS AS FG ANNOUNCES RESTRUCTURING, TAKE OVER BY BANKS