DANIEL OKOH FROM RIVERS STATE SUCCEEDS AYOKUNLE AS CAN PRESIDENT

The assembly also marks the end of the tenure of Samson Olusupo Ayokunle and members of the national executive under his team.

The outgoing CAN president thanked all Nigerians for their support and prayers.

The general assembly, sent-forth service and dinner will hold tomorrow, while the handing over ceremony and beginning of the new transition will take place on Friday, July 29.

The Most Rev. Daniel Chukwudumebi Okoh 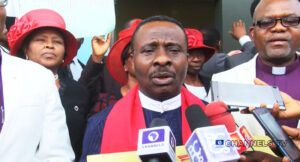 was born on November 12, 1963 in Kano to Christian parents. He is a native of Ndoni in Ogba/Egbema/Ndoni Local Government Area of Rivers State, Nigeria.

He is married to Ngozi and they are blessed with four children. Archbishop Daniel Okoh is a product of the famous Dennis Memorial Grammar School, Onitsha. In 1988, he graduated from the University of Port-Harcourt in Second Class Upper Division in Political Science and Education.

Thereafter, he attended Christ Holy Church Seminary, Onitsha and was awarded a diploma in Theology. Since then he has undertaken many courses and participated in seminars that are relevant to his ministry work both in Nigeria and abroad.

As the General Superintendent of Christ Holy Church International – an African Independent Church – he leads his denomination in ecumenical relations with other denominations in the body of Christ and engages with people of other religions in dialogue for peaceful co-existence and sustainable development. For more than 20 years, Most Rev. Daniel Okoh, has been actively involved in ecumenical relations and interfaith dialogue in and outside Nigeria

On 27th August 1976 the (then) Federal Military Government, under Gen. Obasanjo invited several Church Leaders of diverse denominations to Dodan Barracks, Lagos. the Government’s sole purpose was to hold a discussion with the Church Leaders, on the National Pledge and the salutation of the National Flag, which the Government intended to introduce into the Nation’s Primary and Secondary Schools.

The Church Leaders did not object to the introduction of the two items provided and on the condition that reading and reciting the National Pledge and saluting the National Flag would be preceded by the usual Morning Devotions, during which the Staff and the Students of each school worship their Creator and offer Praises and Prayers to Him. Immediately after the meeting the Church Leaders spontaneously decided to go to a place, not too far from Dodan Barracks where they could hold another meeting. the Catholic Secretariat opposite the race course bus stop was unanimously chosen.

At the meeting, the Church Leaders arrived at a monumental decision that they should from an organisation which would provide a forum where they could regularly meet together and take joint actions on vital matters, especially on issues which affect the Christian Faith and the welfare of the generality of Nigerians. That was the origin and the beginning of the Christian Association of Nigeria (CAN).

Those Church Leaders who met at Dodan Barracks and later at the Catholic Secretariat on the historic August day, were right in their conviction that the Omnipotent God Himself through the Holy Spirit gave them a special ecumenical assignment. It was this conviction which prompted them to select out of the several names suggested for their coming together the name Christian Association of Nigeria (CAN). They strongly felt that with the help of the Holy Spirit, the Church in Nigeria can and will achieve unprecedented feats, to Christ.

That mustard seed planted on that eventful day has now grown to cover all the nooks and crannies of Nigeria with the Head Office at the National Christian Centre Abuja.

The first constitution was signed on 20th April 1977 the founding fathers with:

Others were represented by