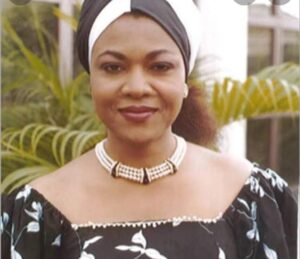 We have heard what happened at Prof Soludo’s inauguration ceremony Thursday.
We cannot remain silent and pretend it is okay to engage in a behaviour that is unspeakable and intolerable in any civilized society and most of all, something that is complete anathema to Igbo culture.

I do not know the background to that deplorable incident that nearly marred Soludo’s inauguration and I don’t think the background matters. What matters is that Mrs Obiano decided to affirm her position as the pre-eminent woman in the state by leaving her seat to walk to where Bianca Ojukwu was seated and poured insults on her. And Bianca replied by slapping her sister, Mrs Obiano. That was not okay. Viewing this on video, it is unbelievable that these two Sisters could do this with the eyes of the world pasted on Anambra. Was it totally unavoidable? Was there no better way?

From all over the world Nigerian women are filled with shame.
That vicious slur on Bianca’s character was a slur on all hardworking women; that loud slap was a slap in the face of Anambra state.

By that ugly behaviour, they dragged the headlines away from the inspiring vision that Soludo presented; the hope he promised the people and took world attention away to a place of banality and ugliness.

We cannot keep quiet and pretend it is acceptable for Bianca to slap the wife of the Governor and we cannot approve of the wife of the Governor to publicly defame and disgrace other women who are less empowered. Even if the woman were the poorest of rural women and no matter the provocation, it was still unconscionable to instigate a physical exchange during that ceremony.

Mrs Obiano’s action brings to the full view of the world, the massive sense of entitlement among some wives of Governors that leads them to deliver atrocious insults and disrespect to women who do not have big “God Father’s” in the system. It also brings to view the private sufferings of Women in Politics and Government.

Nothing justifies what Mrs Obiano did in Awka on thursday and what she did is not a matter for Anambra alone but for the whole nation. The Nigerian population today has slightly more females than males. Out of the over 70 million females, only 36 will get to be First Ladies in any four year election cycle. The rest will be women struggling for a place under the sun by the dint of their hard work. To now say they cannot have a full sense of belonging; cannot enter the doors of power; cannot add value to governance or politics; to discriminate against women, brutalize them and block them from full inclusion in state or national affairs simply because they are not empowered by marriage to enjoy vintage positions , is a great disservice to womanhood and the country.

For long, the hard working women of Nigeria have suffered much abuse. Many brilliant women who could have added value have been hindered by the hostilities and antagonisms of henchmen and spouses of Chief Executives. The women themselves have covered up their own bad treatment so as not to be further discriminated against in a system where the scale of power has been weighted against them.So, in a way, by their silence, women have contributed to the making of the Mrs Obianos of Nigeria.

But it is now time to raise voices against the abuse of women by women. The perpetrators should be named and shamed where ever it happens.
It is time for a change in First Lady-ship. We need to see our sister First Ladies as champions of women’s progress and shining examples of sisterly love. We want our First Ladies to shine the light on women’s issues and open the door for many more women to enter the critical positions in both politics and government. We don’t need our women bullied, ostracized and defamed simply for jumping up to be seen and heard and asking to be let into the doors of power in a hostile environment. The iron cast ceilings of tradition are hard enough to surmount. But with the entry doors of power blocked by angry, entitled, previledged women, we have no chance at all.

WHY I STRUCK: BIANCA OJUKWU EXPLAINS THE SLAP SAGA

WHY I STRUCK: BIANCA OJUKWU EXPLAINS THE SLAP SAGA