This is not the first time the Service will deliberately publish falsehood against my Principal, our Governor, Adegboyega Oyetola or misrepresent him

As a trained journalist, I hardly take on colleagues who genuinely make mistakes in the course of discharging their responsibilities. But when the mistake is repeated more than twice, it means a pattern is emerging and the earlier one deals with such a matter the better for the reading public.

As a human being, and a member of the Nigerian society, it is normal to have sympathy for either a political party or a candidate. But as a professional journalist, you don’t allow such to becloud your sense of judgement in the discharge of your professional duty.

I am tempted to believe that some staff of the BBC Yoruba Service are serving an interest and unless they retrace their steps, they will damage the reputation the Yoruba BBC is building for itself.

This is not the first time the Service will deliberately publish falsehood against my Principal, our Governor, Adegboyega Oyetola or misrepresent him. If the campaigns were still on, I probably would have concluded that it was part of the game. But campaigns are over now. This is where I find its report today, claiming that Oyetola is owing salaries distasteful, absurd and unprofessional.

Thankfully, I have seen a few comments under the post saying Oyetola is not owing. But I feel compelled to pen this down to alert the whole world to the clandestine moves by some BBC Yoruba staff to destroy the reputable image of the media organisation on the alter of political porridge. For the upteenth time, my Principal, our Governor, Adegboyega Oyetola is not owing workers salaries from November 2018 till date, just as he hasn’t borrowed a dime despite prosecuting infrastructure in the face of the challenging economic impact across the globe and the humongous debts he inherited.

Not only does he not owe a dime of salaries and pensions from 2018 till date, he has been doing his best possible within the very weak financial status and debt overhang he inherited as Governor to clear and offset those arrears.

These things are easily verifiable by a media practitioner or organisation that truly wants to do a professional job.

Conclusively, E ba ni so fun BBC Yoruba wipe, Oyetola o je owo osu osise. If they are in doubt, they are free to fact-check.

Omipidan is the Chief Press Secretary to Osun Governor 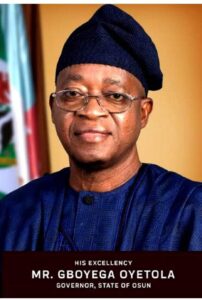 OPINION: WHY ASUU CANNOT BE BANNED