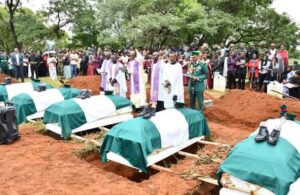 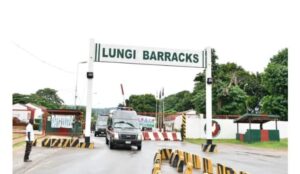 Guards Brigade Nigerian Army and the entire barracks community was today (Thursday) August 11, 2022 thrown into state of mourning as the remains of Captain Attah Samuel and four other soldiers who recently paid the supreme price during a clearance operation in Bwari Area Council of the FCT were laid to rest at the Guards Brigade Cemetery, Maitama, Abuja.

While reading the funeral oration of the deceased officer and soldiers, the Commanding Officers of 7 Guards Battalion, Lt Col Salim Hassan and Commanding Officer, 176 Guards Battalion, Lt Col Joshuah Adisa, described the late Captain and Soldiers as thoroughly-bred men who were genuinely committed to their duties in defence of Nigeria and whose contributions and services would be greatly missed.
They asked God to console the families left behind stressing that while the Brigade and the Nigerian Army mourns, the families should take solace in the fact that they had fought a just fight and their souls shall continue to rest with the lord till the resurrection morning.”