APC CONVENTION SHOULD NOT BE ANOTHER DOLLAR RAIN, PRESIDENCY MUST NOT BE FOR SALE – OLAWEPO-HASHIM WARNS

According to him, “the PDP has demonstrated that it has learnt nothing, but as a party, the APC cannot follow her inglorious example. The next President of Nigeria must not be a Mafioso leader. Our President must not be a gangster!”

Achieftain of the ruling All Progressive Congress, APC, Mr. Gbenga Olawepo-Hashim has cautioned that the party has a higher responsibility not to allow Its Presidential Primaries and convention to become “another dollar rain and a trading platform for the highest bidder.”

In a statement from his media office in Abuja on Tuesday, Olawepo-Hashim explained “that our country is neither a commodity to be traded, nor a property to be auctioned and sold to the highest bidder, adding that Nigerian Presidency has never been for sale it should not be for sale now.”

According to him, “the PDP has demonstrated that it has learnt nothing, but as a party, the APC cannot follow her inglorious example. The next President of Nigeria must not be a Mafioso leader. Our President must not be a gangster!” 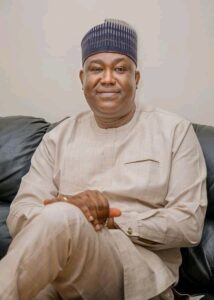 He added that “as a party in Government, the APC has a sacred and patriotic duty to guide a disciplined transfer of power not one left in the hands of the god of mammon”

While noting that the APC, being the party of the sitting President, Olawepo-Hashim argued that a lot is expected from it in terms of direction and leadership, adding that the government still has a lot of leverage and political enforcement mechanisms beyond money.

The former Presidential candidate noted that “national interest is what should guide the choice of the APC and some of the urgent national imperative should include shortlisting a candidate that will heal the wounds of division in the country and finding also a Vice that will compliment him/her in this national objective.”

He recalled that “In 1979, President Shehu Shagari was initially a senatorial aspirant who was drafted into the Presidential race and went ahead to win .On the political turf then there were many money bags who were nicely told to back off because Nigeria’s Presidency is not for sale.”

He equally noted that Peter Obi did quit the People’s Democratic Party, PDP under the excuse that the build up to the convention has been seriously monetized and that “Pius Anyim former Senate President could not hide his frustration that the voting did not reflect the current issues germane to the nation.”

Olawepo-Hashim therefore enjoined the Party’s Screening Committee to “ be serious about the exercise of screening. The EFCC must be ready to follow large movement of illicit cash for politics and seize where necessary, laundered funds in circulation and prosecute offenders.”

He also re-emphasised the fact that “the question of nomination of flag bearers are exclusive matters for parties and party priorities and national interest are the highest imperative and nothing else.”

According to him, political parties are constitutionally recognised institutions and the only area in their affairs where INEC is permitted to interfere in their affairs is seeking to collect their audited accounts through her Auditors and the body is expected to forward same to the National Assembly.

“Even the national assembly and the courts have limited scope for interventions in party affairs under section 222.The Constitution restricts this purely to when there are criminal infractions this is provided for in Section 223.

“That the PDP made a mess of itself by rushing into its Primaries does not mean that the APC and other political parties must do so.”

He also argued that ” parties have up to August 25 under section 29.1 of Electoral Act 2022 to close their nomination not as stipulated by inec guidelines.”

HISTORY WILL JUDGE BETRAYERS, THEY WILL LIVE TO SEE HOW BETRAYERS SUFFER: WIKE REACTS TO ELECTION LOSS