President Muhammadu Buhari(GCFR), the CECPC, Asiwaju Bola Ahmed Tinubu and all other leaders of the APC deserve to be commended and congratulated too 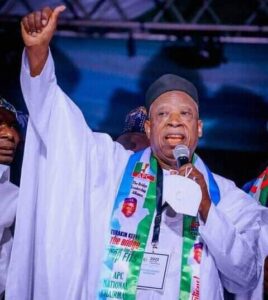 The Governor of Ondo State and Chairman, South West Governors’ Forum, Arakunrin Oluwarotimi Odunayo Akeredolu, SAN has expressed optimism that the outcome of the just-concluded national convention of the All Progressives Congress (APC) would provide an inspiring enabler for cohesion and stability.

Governor Akeredolu, who doubles as the Chairman of the Southern Nigeria Governors’ Forum has, therefore, admonished all contestants for various positions to leverage on the strength of their commitment to serve the party at different levels.

The governor said:”We must consider the resolve to serve the people, even at the party level, a commendable strive. At times like this, such strives are of courage. They are borne out of individual zeal and passion for the party. Such efforts are undoubtedly, replete with brighter prospects–that we can shape the party stronger today, for tomorrow.

“As party leaders and faithful of varied but strongly-nested leverages and responsibilities, we have played the game not for our selfish interests even if our individual desires to serve as well as the purposeful drives to achieve same may have differed. Notwithstanding, our collective, though unsung instincts were incurably geared toward the common goal of altruistic service to the party.

“We must, therefore, at this point, put the past behind us for the greater objective to serve the people and the larger society through the instrumentality of the party platform. We have all won together. As such, the responsibility to build together is for us all irrespective of who emerged or whose aspirations are yet to come to fruition. God’s time is the best.

“For the newly-elected, here is a huge possibility of better days ahead of us all; and clearly, a greater opportunity for oneness, more than ever before, has again, berthed. Galvanize us for the enormous task ahead.

“You have our mandate, as Governors and leaders of our various states, to provide quality leadership because your individual capacities to so do have never been in doubt. On our part, we shall be ceaseless in engaging you constructively throughout your tenure in office.

“President Muhammadu Buhari(GCFR), the CECPC, Asiwaju Bola Ahmed Tinubu and all other leaders of the APC deserve to be commended and congratulated too. They have jointly and severally demonstrated in no small measure, an appreciable degree of leadership in the course of this process to chart a fresh path to enhance unity”.

OPINION BY ADEDOYIN: WHY 2023 MIGHT BE A STRAIGHT ‘FIGHT’ BETWEEN ATIKU AND TINUBU

OPINION BY ADEDOYIN: WHY 2023 MIGHT BE A STRAIGHT 'FIGHT' BETWEEN ATIKU AND TINUBU