According to Segun Awogbade, Chairman, Isin Council, "Mr Olawepo-Hashim is a very kind man, I have been his supporter for 25 years 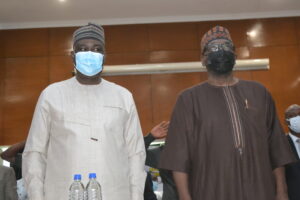 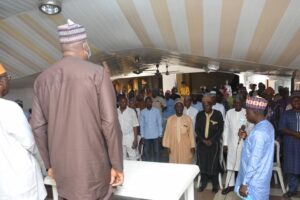 A week after he hosted Party Chairmen from the States in North Central geo-political zone in Abuja on his 2023 ambition, frontline presidential aspirant in the ruling All Progressive Congress, APC, Mr. Gbenga Olawepo-Hashim moved to Ilorin, Kwara State over the weekend to consult with Chairmen of the party across the sixteen Local Government Council Areas.

At the parley, Olawepo-Hashim restated his desire to seek the ticket of his party, and subsequently lead the country back to the path of growth and development in 2023. While informing the gathering of his intention to formally declare for the race on Tuesday, May 3rd, 2022, he expressed his commitment to unite the country which he said is “presently badly divided along ethnic and religious lines.”

He assured the crowd of keeping his promise of running an inclusive government to accommodate various tendencies in order to heal and assuage the pains arising from the various divisions and controversies across the nation.

He maintained that the “solution to National Security, the Unemployment problem, High cost of Petroleum products and basic items requires new and fresh approach to handle, that those who have never paid for anything they consume in the past 23 years cannot understand.

He also used the occasion to applaud the performance of the state governor in the last three years and subsequently endorsed his second term bid to govern the state in 2023.

According to him, worthy of commendation is the governor’s policy of giving political space to youths and women, while also commending his efforts to restore the dignity of the state in the areas of education, infrastructures and human capital development.

During his earlier visit to the state late last year, Olawepo-Hashim had maintained that the liberation of Kwara took several decades and inflicted several battle scars on the participants, adding that the state must not be allowed to go back to slavery and socio-political emasculation that had arrested the progress of the state for many years.

The chairmen, many of whom are traditional political associates of the aspirant pledged their loyalty and support to who they say “he is our own and ally of our Governor”.

According to Segun Awogbade, Chairman, Isin Council, “Mr Olawepo-Hashim is a very kind man, I have been his supporter for 25 years,” while Alhaji Shehu Yahaya, Chairman, Asa added that “we fought for the freedom of Kwara together as our leader”.