Viewpoint: Chidimma and Her New Trophy:

By Adewale Adeoye
We have read about Chidinma winning a laurel while in the custody of the Nigerian prisons. She was even decorated and honoured by the Nigerian Prisons putting her in a special place among suspected criminals. A suspectd murderer has been honoured and revered by Nigerian Prisons.
She did not contest in her University examination nor in a quiz for moral rejuvenation. She contested in an entirely different realm.
It is unfortunate that in Nigeria, people of questionable moral height are taking over the space. The other day, I watched a Senator in a pornographic dance. He wants to be the next Governor in Osun state. Osun is hub of Yoruba moral, spiritual and political authority.
I think the chidinma case is extremely in bad taste. She is standing trial for murder and even manslaughter. She was said to have stabbed her friend, a TV owner Osifo. The man died. The law says murderers or suspected criminals should have their days of justice not their days of honour even while trial persists.
In series of TV chats, she narrated how she stabbed this man to death. Now, the Nigerian Prison authority is parading her with moral apparel, a trophy and ethical medal while the trial is on-going.
I think inmates on trial should not have been allowed to participate in an event that will increase the tempo of public perception of a suspect’s moral low or high, otherwise a suspect can be asked to seek electoral position and what happens if he wins the election into an office that requires immunity from prosecution?
While prisons are also aimed to reform inmates, it should not be an institution to uplift suspected criminals above their demonstrated moral standards or values. Prisons should not conceive of reforming a suspect that has not been convicted. That is jumping the gun.
Knowing this country, her winning that contest may have been orchestrated by a nest of rogues to divert public attention from the blood of a man, a father hanging on her two shoulders.
The next time she comes to court, the prisons want Nigerians and even the judges to see her as a special person that probably occupies an important cultural position who should be protected by the State and viewed from the prism of honour by Nigerians in the gallery. 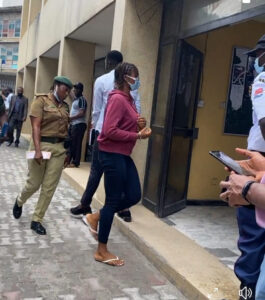