Alhaji Hakeem Lawal maintained that the SDP represents the new face of Kwara progress where all residents will benefit from its shared prosperity. 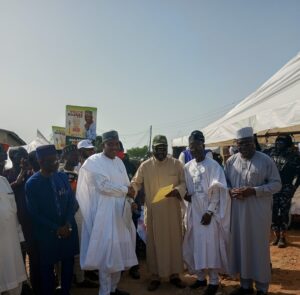 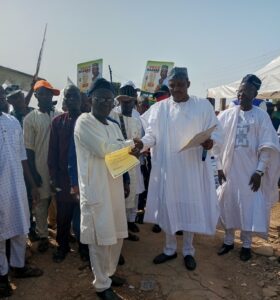 Ahead of the official commencement of political campaign for the 2023 elections, the Kwara State Chapter of the Social Democratic Party (SDP) today inaugurated its campaign Council and Organisation to ensure the victory of all its candidates in the polls.

The event which was witnessed by a huge crowd of party officials and supporters took place at the Agba Dam Road Secretariat of the Party, which was also officially opened on the occasion.

TINUBU IN BAYELSA, PROMISES TO RESTORE STATE TO RIGHTFUL PLACE

Igbo Must Reflect on Reality of Tinubu’s Presidency – Nnamani

The Campaign organization in turn is made up of six Directorates viz: Planning, Research and Strategy; Finance, Security, Media and Strategic Communication; Legal and Special Duties.

While Alhaji Kaleel Bolaji is the DG Administration, Architect Kale Belgore is the Co-DG, Operations, while Dr. Bolaji Afolabi is the Secretary of the Campaign organization.

The 10 members in the Finance Directorate will be led by Mr. S.O Alabi, while Oluwasegun Abifarin is leading the 11-member Media and Strategic Communication Directorate. There are 14 members in the Special Duties Directorate, led by Alhaji Tunde Mohammed.

Other offices include Protocol and Events unit with 18 members and Contact and Mobilisation unit with 79 members, while the Secretariat/General Administration unit has 12 members.

As part of the event, the campaign team for the three Senatorial zones of Kwara South, Central and North as well as the Local Government Area Councils were also inaugurated.

Speaking at the occasion, the State Chairman of the Party, Alhaji Afolabi Azeez explained that while the Campaign Council will serve as a policy making platform, the Campaign Organisation will see to the day to day running of the affairs of the campaign. He stressed that the party is confident of victory at the polls and will always strive for equity, fairness, justice and transparency before, during and after the election.

Mallam Bolaji Khaleel, DG (Admin) explained that the Campaign Organisation is a unified campaign structure “from bottom to top” comprising of party members at all levels, and charged members to hit the ground running to get victory for the party.

Hundreds of All Progressive Congress, APC, from Ilorin West, led by Mallam Sophiullai Abdulyekeen  decamped to the SDP at the event. Receiving the decampees, the governorship candidate of the party, Alhaji Hakeem Lawal maintained that the SDP represents the new face of Kwara progress where all residents will benefit from its shared prosperity.

TINUBU IN BAYELSA, PROMISES TO RESTORE STATE TO RIGHTFUL PLACE

Igbo Must Reflect on Reality of Tinubu’s Presidency – Nnamani