We are calling on the people of Osun to ignore the fake lamentations of the incurable propagandists.

Osun Government has described as untrue, the claim by the Governor-elect, Senator Ademola Adeleke, and his party, the Peoples Democratic Party, PDP, that government officials are diverting or looting government assets and property.

Government further accused the PDP of peddling lies and propaganda just to curry underserved public sympathy, insisting that Governor Adegboyega Oyetola does not have a background of pilfering or misappropriating funds, saying that the records are there for all to see and deduce from.

The Governor-elect had in a statement signed by his spokesperson, Mallam Olawale Rasheed, alleged among other things that government officials were already diverting public funds and that the governor had allegedly embarked on borrowing spree.

Responding, the State Commissioner for Information and Civic Orientation, Mrs. Funke Egbemode, noted that “we know where Senator Ademola Adeleke, the governor-elect, is coming from, and the world also knows the antecedent of the incumbent governor, Mr. Adegboyega Oyetola, the hardworking leader, who has served the people of Osun State meritoriously. He does not have the background of pilfering or misappropriating funds. The records are there for verification.”

In a statement, titled “Osun PDP’s incurable penchant for falsehood, propaganda,” the state’s spokesperson further said: ” We have seen the press statement that is in circulation from the camp of Senator Ademola Adeleke, poisoning the public with lies and raising false alarms just to heat up the polity, of the state, as is their practice.

“We did not take any N17billion loan to prosecute the election, just as no government official has embarked on any looting or diversion of any government assets/property as being claimed by the PDP.

“Those who are suddenly realising the enormity of governing a state like Osun should own up to their fears rather than making laughable allegations. Oyetola has creatively managed the assets of the state in the last three-and-a-half years and has picked all the bills of the state without taking loans. Why would he start taking loans at this time?

“Oyetola’s government remains a responsible one that has discharged its duties meritoriously, to the admiration of fellow governors, including those in the opposition.

“It is time for Mr. Adeleke to tell the people how he intends to govern them rather than trying to blame everyone but himself for his fears. Given his admiration for his newly-learnt expression, “fact check”, we extend a call to Mr. Adeleke to show evidence of pilfering or looting to the people of Osun to prove that he is a man whose words have atoms of believability.

“Governor Oyetola already has a reputation, Mr. Adeleke is the one trying to build one for himself. It is a more strategic option to build in silence.

“We are calling on the people of Osun to ignore the fake lamentations of the incurable propagandists. 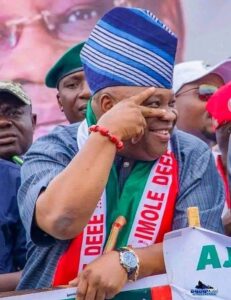 Governor Oyetola has done well thus far and he will continue to do right by the people.’,” Egbemode said

Clergy at Presentation of Tinubu’s Running Mate not Impostors – TCO