More facts have emerged on the reason the outgoing Governor of Anambra State, Willy Obiano, and his wife abruptly left the venue of the swearing-in ceremony of the new Governor of the state, Prof. Chukwuma Soludo.

The PUNCH gathered that Obiano’s wife, Ebelechukwu, slapped Bianca Ojukwu, the widow of the late Chukwuemeka Odumegwu-Ojukwu at the event.

The reason for the clash was not ascertained as of the time of filing this report.

But it was gathered that after Soludo was sworn in, Ebelechukwu walked to where Bianca was seated and immediately, both women engaged themselves in a fisticuff. The unfortunate spectacle drew the attention of security agents and some personalities who pulled Mrs Obiano off the hold of Bianca who was visibly shocked at the action.

There was a temporary commotion at the venue as guests ran helter-skelter before normalcy was restored and Obiano’s wife was moved out of the venue. 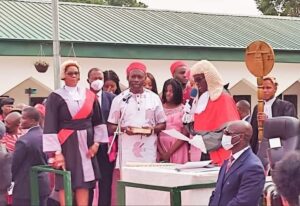 ADEGOKE: PATHOLOGIST IN COURT, REVEALS CAUSE OF DEATH