Should he refuse to quit, it becomes incumbent on the President and Commander-in-Chief of the Armed Forces to remove him forthwith.

The news of the purchase of Declaration of Intent and Nomination Forms to contest for the office of the President in the forthcoming general elections, on the platform of the All Progressives Congress, purportedly by the supporters of the Governor of the Central Bank of Nigeria, Mr Godwin Emefiele, has been received with palpable disbelief and shock by many Nigerians. This act, if unchecked, timeously, portends great danger to the fragile economy of the country.

Rumours had been rife on the subterranean partisan activities linked to him through these shadowy characters in the recent weeks. Pictures of branded vehicles, ostensibly purchased for electioneering campaigns, were also posted on the social media. The audacious moves by those who claimed to be supporting this interest have been unsettling.

This latest news confirms that the Governor may indeed be interested in immersing himself in the murky waters of politics like any other Nigerian with partisan interests. It is incontrovertible that Mr Emefiele enjoys a constitutionally protected right to belong to any group or association and participate fully, just as any Nigerian. It is, however, difficult to imagine that a person who occupies the exalted and sensitive office of the Governor of the Central Bank of Nigeria will be this brazen in actualizing his ambition.

There is no gain asserting the obvious. The combined effect of the Public Service Rules, CBN Act and the 1999 Constitution, as amended, exposes not only the oddity inherent in this brash exercise of presumed right to associate. It also confirms the illegality of the act should he proceed to submit the forms while occupying the seat as Governor of the Central Bank of Nigeria.

Consequently, we admonish Mr Emefiele to leave the office, immediately, for him to pursue his interest. He cannot combine partisan politics with the very delicate assignment of his office. Should he refuse to quit, it becomes incumbent on the President and Commander-in-Chief of the Armed Forces to remove him forthwith.

This is a joke taken too far. 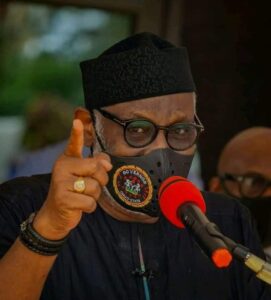 The Civil Society Organisations (CSOs) Coordinating Centre has rejected call for the resignation of the Central Bank of Nigeria Governor, Godwin Emefiele, amid calls by supporters that he should contest for Presidency in 2023.⁣
.⁣
The centre’s Director, Mallam Abubakar Mohammed in a statement made available to journalists in Abuja alleged that some desperate politicians were behind the ceaseless campaigns of calumny against their perceived opponents ahead of the 2023 general election.⁣
.⁣
According to the centre, part of the strategy is to enlist some unsuspecting sections of the media into plot to continue to blackmail and ridicule their opponents by whipping some sentiments against them.⁣
.⁣
The Centre expressed its confidence in Emefiele’s leadership of the apex bank and positive achievements being recorded under his watch.⁣
.⁣
The statement reads, “The CSOs Coordinating Centre hereby rejects the sponsored and biased call on Dr Emefiele to resign over public pressure being mounted on him to run in 2023. We believe that the call for his resignation is not only illegal but evil especially since Emefiele has not even declared interest. Only individuals and groups who believe in his competence have been putting pressure on him to run.⁣
.⁣
“The general public, especially those concerned, should note that we are aware that some CSOs have been heavily mobilised to embark on smear campaign funded by the desperate politicians against Emefiele. We hope those behind this smear campaign will retrace their steps and allow common sense to prevail.”⁣
.

OPINION: Nigeria 2023: Why We Stand on Tinubu’s Mandate, by Wale Adedayo