It is naïve to assume that the biggest alternative for Nigerians is the PDP which had ruled Nigeria for 16 years characterized by rot, depression and melancholy. It is a mistake to think such a party would suddenly transform itself in 2023 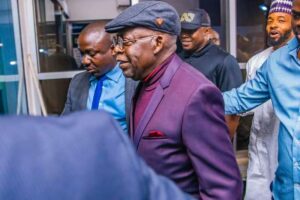 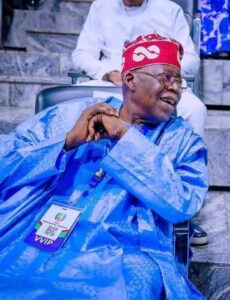 The event organized by the Alliance of Yoruba Democratic Movements, (AYDM) took place at the St Leo Catholic Church in Lagos where no fewer than 1,500 delegates representing various groups endorsed the former Lagos State Governor.

The AYDM said Nigeria, once again is at a crossroad, adding that troubled two-century old history again is  being put to historic test come February 2023 when the people again, will go to the poll to choose a President that will stir the affairs of Africa’s most populous country, yet most poor, vulnerably and constantly on the brink.

AYDM said ‘For the past three months, the AYDM has held a string of consultations with organized groups, socio cultural and community based groups spread across the south west areas, from lowland to highland, valleys, seashores, mountains, tropical and savannah where our people, rich and poor, the wretched and haves reside.  On Wednesday October 05, leaders of 121 groups capped the consultations with a meeting which took several hours,”

The group said it promises to campaign vigorously, ‘with all our strength, with all our sweat, our brain and even our brawl, through the streets, on the road, in the farms, on the sea shores, in the valleys, on the mountains, on the sea and on the land; on radio, on the social media and using all means of mass communications.”

The group said “We have no illusion that the victory of Asiwaju Ahmed Tinubu will lead to automatic transformation of Nigeria. The coming years will be very tough but there will emerge a better capacity and atmosphere to deal with the whirlwind and curtail its ruinous upsurge. Asiwaju will not totally resolve the problems facing Nigeria, however, we are clear in our perspective that his victory will lift Nigeria higher up from her present state of affairs to the benefit of all, irrespective of colour, creed, faith and religion.

It noted that since 1914 when the great civilizations were merged by foreign interests, the country has been an atomic society in perpetual conflict with itself.

‘In 1914, a thick cloud of anomie descended on the destiny of primordial nations -including the Oyo empire, the Bini Kingdom to Kwararafa multi ethnic state, the Borno Empire which extended to today’s southern Libya, the Wukari Kingdom, the Itsekiri Kingdom-when by fiat, the autonomous nations were forced to live under a one -dimensional philosophy squeezed into one inconvenient whole.’

The AYDM said in  coming to this conclusion, it considered many factors, the capacity and political sagacity of the candidate; the rich history in anti-fascist campaign of the 1980s through the 1990s, the possession of raw courage, liberal investment in pro-democracy struggle, a tradition of tolerance for dissent and above all, the ability to transform and reengineer the current APC as a political party likely to provide the impetus that will lead to the restructuring of Nigeria, being the minimum condition necessary for the growth and prosperity of the country.

“It is on this basis, that we, representatives of 121 Pan Yoruba, civil society, community based groups in the South West hereby adopt ASIWAJU AHMED BOLA TINUBU as our candidate and that of our people for the 2023 Presidential Election,’ the declaration was signed by Popoola Ajayi
The group said there is no doubt that in the past few years, the image of the APC has been bruised by the draconian forces in Abuja seen in their acts of tyranny and the illness of the economy under its watch and the insistence on sustaining a garrison structure for Nigeria.

‘It is naïve to assume that the biggest alternative for Nigerians is the PDP which had ruled Nigeria for 16 years characterized by rot, depression and melancholy. It is a mistake to think such a party would suddenly transform itself in 2023. This is not to diminish the fact that the APC has immense contradictions and should not be seen as an end in itself’

It said in the context of Nigerian political framework and given the options available to the people, the APC is better but not the best, in our own opinion. Faced with a difficult situation in an extremely testy field, the Yoruba of the South West have to make a choice in 2023 considering the better possible options. From our own prior, informed consent and weighing the variety of choices available to the people of the south west, we have to pick a candidate near the prospect of allaying our fears as a people. In making this choice, we are not unaware of the rights of the people of the South West who may differ. We respect their opinions. We urge them to respect ours. Our choice is ours, their choice is theirs: On the field we shall meet.

The AYDM said those who hate Tinubu candidacy do so for many reasons one of which is their cruel hatred for anything Yoruba which they continue to propel using false narratives to justify their anger against the dignity associated with Yoruba heritage. ‘We have listened to those who argue that it is their turn. We posit that since 1960, when Nigeria gained independence, there have been 14 Presidents and Heads of State. Two of them ruled Nigeria twice. Out of the 12 Presidents and Heads of State, only one has been Yoruba, two were of Igbo extraction, Dr Nnamdi Azikiwe and Gen Aguiyi Ironsi)  two from Middle Belt (Yakubu Gowon and Abdulsalami Abubakar) one is Kanuri (Gen Sani Abacha), while four are of Fulani extraction (Gens Ibrahim Babangida, Mohammadu Buhari, Alhaji Shehu Shagari and Murtala Mohammed). It is mischievous not to admit that the history.’